You are here: Home1 / About KS SAR2 / State Society History

Arthur M. King was the lone Compatriot of the Kansas Society to serve as President General (1980). Sixteen members of Kansas SAR are on record as having served as Vice President General of the South Central District. Barnett Ellis is recognized as President Emeritus of the SAR Foundation. 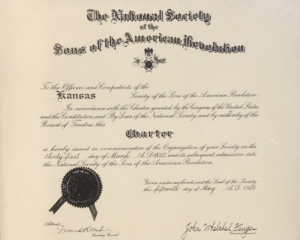 The growth rate during the 1890s was not surpassed until the 1970s. After a brisk start, growth slumped in the second decade. Growth was good during the years after World War I, perhaps because of a new patriotism. The Kansas SAR has always been centered around Topeka, but with the advent of the Thomas Jefferson Chapter in 1924, growth really took off. Most growth ceased during the depression years. Growth picked up a bit during World War II and the post war years, but nothing spectacular happened until the 1960s, when the Delaware Crossing Chapter appeared on the scene. With patriotism renewed during the Bicentennial, coupled with a nationwide interest in genealogy, growth really took off. The leadership of President General Arthur M. King, Augustus di Zerega, V, and Ralph H. Goodell brought membership growth to the forefront. This set the stage for the 1980s, when growth reached its all-time high. The recruitment activities of Robert E. Burt, Herrick H. Kesler, and Lee W. Patrick contributed to much of this growth. Things slowed down a bit in the 1990s and Konza Prairie was the only new chapter to be chartered. A resurgence took place in the new millennium with the creation of four new chapters: Monticello, Henry Leavenworth, John Seward and the Prairie Minutemen plus the revival of the Bennington and Fort Hays chapters.

The Kansas Society is recognized nationally for its efforts to promote patriotism and an interest in the American Revolution. Much of this is accomplished through Youth Programs. The Arthur M. and Berdena King Eagle Scout Scholarship program originated with the Kansas Society through the efforts of Arthur M. King and Robert Burt. Kansan Kris Kobach was the first national winner and was recognized at the Congress in Portland, Oregon. Robert Burt’s efforts to blend Boy Scouts and the SAR resulted in the Burt Award to Scouters incorporating the SAR into activities. For more than a decade, the Kansas Society has sent a youth to the Rumbaugh Orations contest at Congress. This Society is active with the Knight Essay, Poster Contest, and similar activities. For the 2015 program year, the Kansas Society was the only society to participate in all eight youth or education related programs.

“Remembering our obligations to our forefathers” continues to propel the energies of Kansas compatriots. The last two decades have seen great additions to the Kansas Society and the future is full of potential to tell the story of America’s founding.

Kansas Sons of the American Revolution is here to help promote SAR and our chapters.
If you have any questions or would like to know more about SAR, feel free to contact us.

© 2020 Kansas Sons of the American Revolution